How It All Started

Prior to finding naturism, I had never really been one to want to take my clothes off. In fact, I think I covered up more than most people. It took me until I was 21 before I even wore sandals. Not really sure what that was all about, but for some reason I always wore socks and would never want to expose my feet. I didn’t have a problem with taking my shirt off in the summer time, but the situation would have to be right and I would have to feel it was appropriate.

It must have just been the timing, or just a time in my life of exploration, but finally my inhibitions started to go away. In 2006 I was working a job that took me out to the University of British Columbia (UBC) every afternoon to drop off some of the guys I worked with. Well it was summer and it was hot, and my friend asked me if I wanted to go down to the famous Wreck Beach. I had never gone and I figured “what the heck?”

Being mountain bikers, we had very expensive and rather heavy downhill bikes in the company van with us. We couldn’t leave those unattended so we ended up riding them all the way down the Wreck Beach stairs; something I will never do again. We got a lot of weird looks on the way down and almost took out a few people, but we made it and suddenly there was a strange new landscape before me.

I stood in wonder at all the naked people; tall, short, large, skinny, people with tattoos and those without, children, adults, teenagers, both genders, and every race I could imagine, they were all there. I was amazed at what I saw. Here was this wonderful place where everyone was comfortable to be naked around each other. I marvelled that all these different people, obviously from all walks of life, could come together and tear down their societal coverings and become equal. And really that’s exactly what I saw, because when everyone’s naked, everyone is the same. You can’t judge people based on what they wear when they aren’t wearing anything at all. It was a wonderful experience, and while it was too soon for me to participate, the scene I saw intrigued me.

As I watched everyone around me, I saw very little that I could analyze about people. I couldn’t tell who the punk guys were, I didn’t know who the lawyers were, I didn’t know which group would be identified as the ‘college kids’, the ‘jocks’, or the ‘nerds’. The only way I could really know anything about anyone, was to speak to them, or at least sit close enough that I could listen to their conversations. I could only start to draw conclusions once I heard how they spoke, how they acted, and what they had to say. To put it simply, I had to get to know the real person – I couldn’t pass judgement based on what I saw.

This became even more apparent as the sun started to go down, and people began to get dressed and leave. I watched as the couple next to me put leather motorcycle clothing on. I had no idea they were bikers! And more importantly, I had been laughing along with them earlier, which I probably never would have done had I known they were bikers. I probably would have been afraid to go near them! I watched as the younger people down the beach dressed in clothing I would wear, and they grabbed their books and bags before walking off. So they were the college kids – I never would have known. I watched as all different types of people put on the clothing that typically defines to people who we are, but at the end of the day it’s just clothing. What a revelation I was making, and it would change the way I looked at people and the world for the rest of my life. 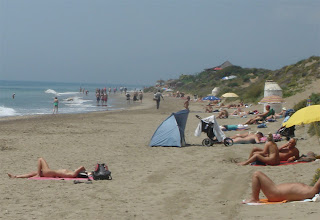 I ended up going back a week later, this time alone. I took a deep breath and disrobed, certain that everyone would look, maybe point, or say something. But nothing happened. Everyone kept doing their own thing, and I didn’t see a single person even look my direction.

I put my iPod on and laid on the beach for a while enjoying the feeling of the sun all over my body; a feeling I had never felt before but it was pure bliss. It was so liberating, so unrestrictive, and I didn’t need to worry about tan lines! I suddenly felt so comfortable with myself and somehow connected to all the likeminded people around me. I marvelled that instead of being ashamed of my body, I felt much more comfortable with everything out in the open.

When we wear clothes, we are hiding ourselves, and I think that whether we are aware of it or not, we feel like everyone else is hiding something and there’s an underlying sense of secrecy. It may be very subliminal, but looking back at my feelings that day, that was exactly what I was experiencing.

Well I had my first nude experience out of the way and I was hooked. I went down to Wreck every day I could. On work days when I was doing paperwork or doing cold calls, I would bring my books down to the beach and do what I needed in the sunshine and in the buff. If only all my clients knew where I was when I was calling them…

The rest is history, really. I’ve met some great people as a nudist, and managed to convince a few of my textile friends to join in. It’s a whole different world once you realize that you don’t need clothes.