Yesterday was the much anticipated naked bungy jump. I had been looking forward to this day since last year’s jump, which had been my first. For those that don’t know, WildPlay Bungy in Nanaimo has been holding an annual naked bungy jump weekend in support of Schizophrenia research for a few years now. The idea is simple; come out and jump naked on a Saturday and Sunday in February, pay a fraction of the normal price, all the money goes to a good cause. I like everything about that equation so when I hear about it last year I had to go. The first jump was awesome and now I plan to go every year.

Last year there were 3 of us who went together, and this year I managed to raise that to 4. The crew that came with me this year were none of the people from last year, however. Really it wasn’t that bad; one had surgery keeping her from going this year and the other was her cousin, who I don’t think I know well enough to bring along this year alone. But I managed to get 3 buddies from work who were all stoked to come along so it was a full car and thus a cheaper ferry ride!

My buddy and I both worked the night shift until 8am the day of the jump, which made for a very exhausting day. The other two guys had both worked till midnight, so they were tired too but were in much better shape than the night crew. We saddled up at 8am and went straight to the local breakfast place for a food boost. Then it was off to the ferry for the 10:30 sailing. I slept most of the ferry ride, obviously. Made it to Wild Play by 12:20 and signed in. Then it was the waiting game. It was way busier than I remember it last year and we didn’t get to jump until 14:00. I was a little nervous about not making the ferry but it would all work out in the end. 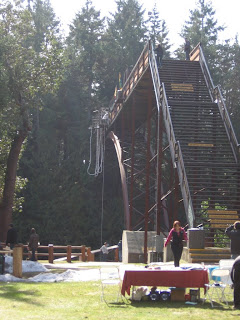 The other jumpers this year were super stoked to be there and the vibe on the bridge was amazing. Everyone was amped and having a great time. There was a whole crew who had body painting done and it looked awesome. One of those guys comes up the steps to the bridge wearing a big house coat. He stops and looks at us with a big smile on his face before opening his house coat to reveal a huge elephant painted on his midsection. You can guess what part of his body was the elephant’s trunk. Loved it, hilarious.

Finally we got to jump and it was just as scary as I remember it. Definitely the same rush as last year, and I somehow doubt my brain will ever get used to jumping off a bridge. But it was great and everyone loved it. 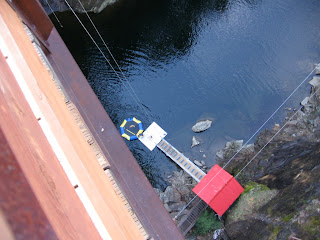 Afterwards it was back into the car to race to the ferry. Thankfully we made it back to the 15:00 ferry in time and it was home time. Some dinner and I was ready for bed. I was so exhausted that I went to bed at 20:00 and woke up at 10:00 the next morning. Yeah mathematicians, that’s a lot of sleep! All in all it was an awesome day and I can’t wait to go back again next year. Even non-nudists are awesome when everyone is naked. It just goes back to the idea that everyone is accepting when everyone is naked. Clothes are what create criticism of others, not the way your body looks. Here were 30 or so naked people who were all the same and accepting of everyone. Not necessarily nudists, just people who realize that when we are all naked we have nothing to hide, nothing to fake, nothing to really criticize. Amazing really.